The Rock of the Wicked Resolution

The Rock of the Wicked Resolution

“John Stewart, Lord of Lorne, when far advanced in life, was a widower, and had three daughters, but no lawful son. By a woman above the common rank, named Maclaurin, he had an illegitimate son, whose name was Dugald. He was a young man of great promise, and had particularly distinguished himself on a recent occasion.

The sons of the chief of Macdougall, by the sister of Lord Lorne, were very desirous of marrying their cousins, the co-heiresses of Lorne, and were assiduous in their attention to their uncle, who resided in the castle of Dunstaffnage, once inhabited by the kings of Caledonia, and still one of the royal palaces of Scotland. They had passed the night at Dunstaffnage, and departed early next morning. But they had not gone far on their way, when they observed a number of boats approaching from the east, crowded with people, with pipes playing, and bearing flags. They found that these boats contained Dugald and his mother; and they soon discovered that old Lord Lorne had resolved to marry the mother of Dugald, and that they were now coming to celebrate the marriage. According to the Scotch law, this marriage would have made Dugald legitimate, and capable of inheriting the ample territories of Lorne. This event would have utterly disappointed the matrimonial schemes of the two nephews, and they instantly formed a dreadful resolution to prevent it. They returned, and asked admittance into the castle; but the doorkeeper remarking a very fierce expression in their countenances, first consulted his master, who was displeased at his hesitating to admit his nephews. The doorkeeper reluctantly received them ; they forced their way into Lord Lorne's apartment, and instantly put him to death, to prevent the intended marriage. The brothers were however disappointed in their expectations,—the heiresses escaped from Dunstaffnage by night, and carried away the charters of the estate. They took refuge with the Earl of Argyle, who soon married the eldest daughter; the second was married to Campbell, of Glenurchy, ancestor of the Earl of Breadalbane; and the third to Campbell, of Ottar. -

This murder was committed towards the end of the 15th century. The rock where the two Macdougalls stood when they discovered the approach of Dugald and his mother, and where they resolved to return and assassinate their uncle, is still well known. It is called in Gaelic by a name which, translated, means The Rock of the Wicked Resolution.” "Literary Gazette and Journal"  Traditions of The Western Highlands No. VIII, 24 April, 1824. 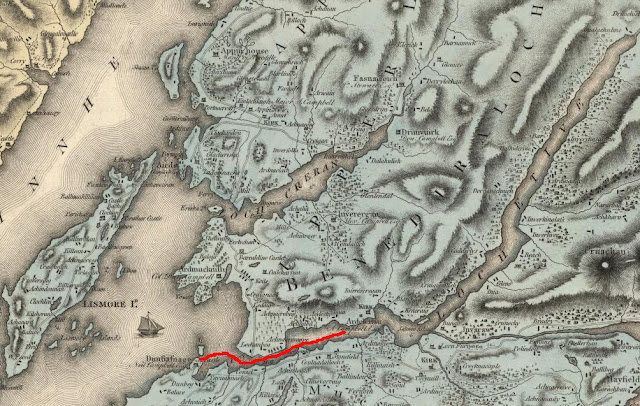 McLaurins sailing from the East to Dunstaffnage Castle from Ardchattan

Why is "sailing from the East" so important, it means the Lorn MacLaurences' are sailing west toward Dunstaffnage Castle on Loch Etive where the Kindred had lived from the time of the bishops of Argyle. vicar Laurancii and his followers were at Kilbodan, Ardchattan on the north shore of Loch Etive in 1420.