Invernenty Sword at Culloden Visitor Center is a fake

"The Stewart Society did say that they wished it to be recorded that, while they agreed to our name appearing on the marker, in their opinion the historical evidence did not support there being a MacLaren clan contingent in the Appin Regiment." E. Hamish McLaren, Chairman CMS April 2007

But apparently history does not matter to the National Trust for Scotland as the Clan MacLaren purchased their history. 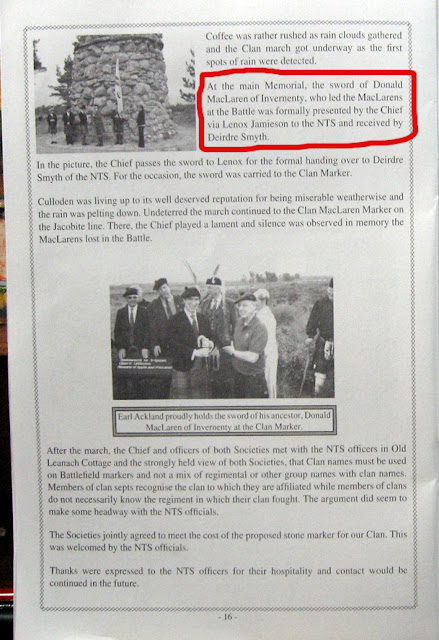 After her death, Dr. Janet McLaren’s (Tutor of Clan MacLaren), symbolic “Protector of the Clan Sword” that was to be passed on to future McLaren Clan Chiefs, became more useful to Donald MacLaren Jr., as Captain Donald McLaren of Invernenty’s sword that miraculously survived Culloden and Donalds capture by the British in the summer of 1746

Part of the bargain that Donald made with the National Trust for Scotland in addition to paying for the Appin Regiment Marker on the Culloden Battlefield with “MacLaren” carved in to it was the loan of the sword.

The “Invernenty Sword” on display at the Culloden Battlefield Visitor Centre is a fake.

Dr. Janet McLaren bought the “old scots broadsword” from an antique dealer, many clan members knew about this back in the 1970s, it is the same sword that is now displayed at the Culloden Visitor Center and labeled with the following.

"Sword belonging to Donald MacLaren of Invernenty, who was out with the Jacobites
in the Forty-Five. He escaped initially after Culloden, was captured, and then escaped
again on the way to Carlisle for trial"

The true account of the sword from Dr. Janet Mclaren in 1972. A reception was held for Donald MacLarenJr., October of 1972, after he reached his majority and took over as Clan Chief from the clan Tutor Dr. Janet MacLaren. At that reception Dr. Janet gave Donald an old claymore as a gift. Here is a quote from her letter to Stuart MacLaurin of Cleveland, OH describing the reception and the sword, published by Banks McLaurin in the Clan MacLaren Society, U.S.A. Quarterly #16 page 48.

“The reception was in the library downstairs where Iain read our Donald's pedigree and I read out an extract from Donald's Matriculation of Arms.
Then I handed Donald, who had already donned his bonnet of Chiefship, my "ancient Scots broadsword" as a symbol of his being "Protector of his Clan".” Dr. Janet MacLaren, 1972 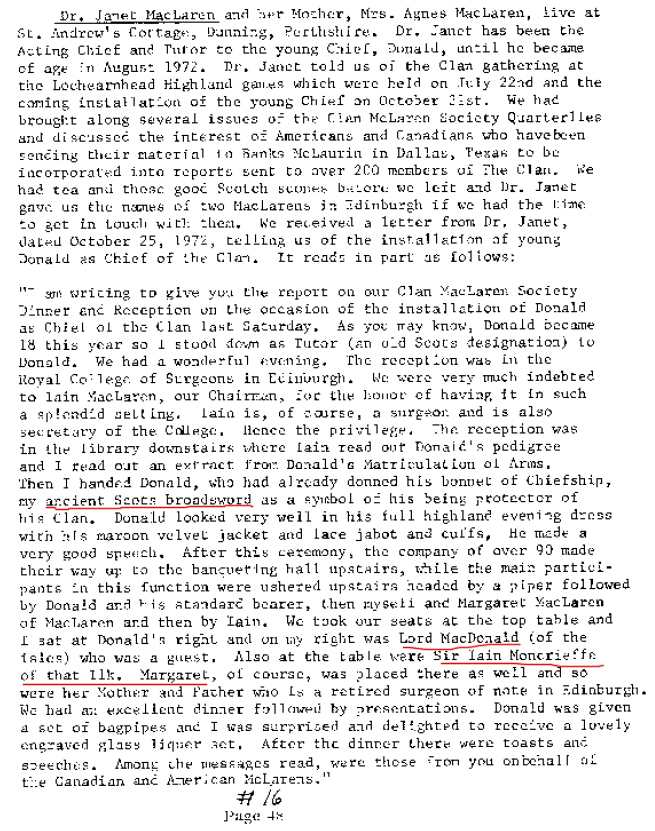 This ceremony took place in the presence of Sir Iain Moncrieffe of that Ilk, Lord MacDonald, Donald MacLaren Jr., his mother. If ever there was a time for the claim to be made that the sword belonged to her ancestor Donald McLaren of Invernenty it would have been then, but she did not, she simply described the sword as "an ancient Scots broadsword". It was only after Dr. Janet MacLarens death did it become a relic of the Battle of Culloden. The only provenance for the sword in 2007 was Hamish and Donald's word and a bank check written to the NTS.

Donald McLaren of Invernenty biography is clear, he had not a penny to pinch when he died and owed his Stewart spouse's family a large debt, his Invernenty home had also been destroyed after his capture by the British. I don't think they let him keep his sword.

The Burning of Invernentie
"June 22, 1746, Letter from Bisset to the Duke [James]. "The party that is at Crieff weenie to Ballquidder and burnt Glencarnocks [Robert Murray (MacGregor)] house and his whole tenants houses, Macklaren of innernenties and Stewart of Ledericks, with some innocent persons houses that were interjected among these." "Atholl Chronicles and Jacobite Letters"

A young law clerk Walter Scott visited Invernenty at age fifteen in 1767 with a small detachment of British soldiers to confront the McLarens concerning a debt and property rights. They had left fifteen years earlier for Atholl after Donald McLarens death in 1752.

The "2nd battle of Culloden" (as E. Hamish McLaren described it) against the NTS and the Appin McLaurins, went too far with this intentional deceit.

So now the Clan MacLarens’ symbol of the "Protector of the Clan" is in a glass display case at the Culloden Visitor Centre, mislabeled and deceiving the public.