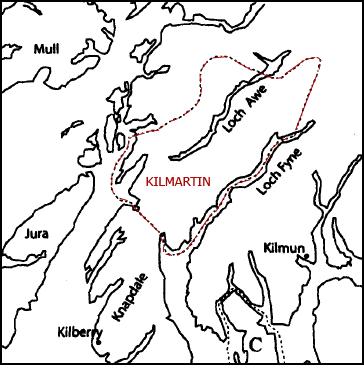 Mártainn was the first vicar of Kilmartin, Argyll in 1304, Labhruinn was the second vicar in 1355. Kilmartin parish is on the southern border of Lorn, above Loch Awe, an early stronghold of Clan Campbell. The religious significance of Kilmartin, one of the Mother Celtic churches, goes back to prehistoric times.

"Kilmartin church has been the parish church for as long as there are records. Its importance in the later medieval period is suggested by its impressive collection of sculpture: 76 graveslabs, 3 effigies, 3 tomb chests, 3 crosses. It was of sufficiently high status that in 1480 Colin Campbell of Glenorchy was 'honorablie bureit in the Kirk of Kilmertyne. This was a family keen to affinn its ancient rights to be here. The choice of burial ground was crucial for asserting a sense of identity rooted in a particular place and may suggest that Kilmartin was considered to be a foundation of considerable antiquity.”(Butter, 2007)

Late in vicar Labhruinn’s tenure at Kilmartin, the Bonkyl Stewarts became the new Lords of Lorn by means of marriage to the daughters of MacDougall Lord of Lorn.

“The close blood ties of ecclesiastics with the ruling lineage of Clann Chaimbeul were maintained throughout the fifteenth and sixteenth centuries, but there was an increasingly diverse range of ecclesiastical livings available. Initially centered upon the church of Kilmartin and the archdeaconry of Argyll, it broadened as the ruling Lochawe lineage and cadet lineages of Glenorchy and Cawdor expanded into new territories, most notably in Lorn and Sodor, where kinsmen controlled the Ardchattan Priory, the bishopric of Sodor and, by extension, Iona Abbey." (MacDonald, 2013)

In 1685 there were still MacLaurins in Kilmartin parish, the Archibald McLauroin family in Auchinell, Parish of Kilmartin, his testament is dated 1685. Later in the 1841 census there is Mary MacLaren age 80 in Kilmartin.

“Two other surviving mid-sixteenth century charters also tied kindreds to specific lands with specific religious duties. In 1546 the Earl of Argyll mortified lands in the barony of Ardscotnish to “Gilbertus Makolchallum”, chaplain and the “divine celebrant” (of mass) in Kilmartin church, following whose death the lands were to pass to the next chaplain and divine celebrant elected. Gille-Brìghde “Makolchallum” was the son of an earlier priest “dominus Johannes McColmsoun”, who may be identical with “Iain Makolchallum”, chaplain of Kilmartin in 1534, although it is possible that this latter figure was a brother. In any case, the clerical descent and shared benefice together point to the emergence of another ecclesiastical lineage derived from the local MacOlchallum (Gaelic MacMhaoil Chaluim) kindred centered on the chaplaincy of Kilmartin in the early sixteenth century. Again, opportunities were determined chiefly by the umbrella of lordship and patronage of Clann Chaimbeul rather than by locality, as Gille-Brìghde also served as vicar and rector of Lochgoilhead and Craignish during his career.” MacDonald, Iain. The Northern World: Clerics and Clansmen: The Diocese of Argyll between the Twelfth and Sixteenth Centuries (1). Leiden, NL: Brill, 2013. ProQuest ebrary. Web. 28 June 2016.