Dugald Stewart of Appin I

Dugald Stewart of Appin I

One of the problems of finding McLaurences in historical records, is that by the time written records were being kept they had been reduced from a sub-aristocratic learned ecclesiastical Kindred too tenant/crofters. Those of the McLaurence Kindred to the south and east in Lorn found themselves in Campbell controlled areas in the early 1500s, where records were common with the Campbell’s of Argyll, Glenorchy and Breadalbane, records that are currently being digitized. McLaurence Kindred records in Appin where the Stewarts were chiefs are nonexistent for the same time period. 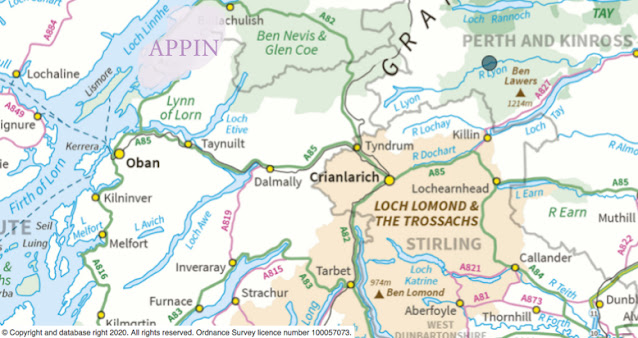 So, we are dependent on tradition handed down the generations for the origin of the Stewarts of Appin. We do not even find out Dugald Stewart 1st of Appin’s (<1463 - <1500), first name from existing records until after his death. All we know, is that he was the son of Sir John Stewart, Lord of Lorn (1400 - 20, Dec. 1463) who he was murdered by outcast ‘Alan of the Wood’ MacDougall and his followers. Sir John’s Lorn lands winding up in the hands of his brother Walter Stewart. Things changed six years later in 1469 when Walter Stewart traded Lorn for Innermeath, with Lorn now going to Colin Campbell 1st Earl of Argyll, who was the murdered John Stewart of Lorn’s son-in-law.

“On the 1st December 1469, Walter [Stewart], "Lord Lorn," granted to the  Earl of Argyll the bond that he would immediately enter upon Lorn, and thereafter resign the title and the lands for a new grant to the Earl, who in turn obliged himself to obtain from the King for Walter the title of Lord Innermeath, with precedence over that of Lorn ; giving a striking proof of the weakness of the Crown, when one subject could thus undertake to procure a title of honour for another. In fact it is probable that the Earl, from his influential position as Justiciar of Scotland, had been able to secure in advance the sanction of the youthful King to this evidently long-planned arrangement, for we find a bond on the 13th April 1470, by Walter Stewart, " Lord Innermeath," never to dispute the preceding resignation under a penalty of 6000 merks â€” and on the next day Walter completed the resignation of the lands and title to the King, who three days after granted them to the Earl of Argyll, to be held blench of the King on the rendering of a mantle at Whitsunday, if required. The Earl then proceeded to apportion to his kinsman of Glenorchy his share of the acquired lands, making over to him one-third of  Lorn, which included a third of Lismore and a belt of land in Appin lying on the north shore of Loch Creran, both of which, however, King James IV. subsequently compelled Sir Duncan Campbell of Glenorchy to restore to Duncan Stewart of Appin, Dugald’s eldest son and successor.” pg. 94 The Stewarts of Appin

In 1475, twelve years after the murder of Sir John Stewart of Lorn, Colin Campbell, 1st Earl of Argyll (1433 - 1493), serving at the pleasure of King James III of Scotland (1452 - 1488), redistributed Lorn amongst Sir John’s heirs, the three daughters with Campbell husbands and his eldest son Dugald Stewart. Dugald was given Appin, the abbey lands, some of the poorest land in Argyll.

The Clan MacLaren in Balquhidder and Stewart of Appin ‘tradition’ is that Dugald Stewart, 1st of Appin was an illegitimate son of Sir John Stewart of Lorn (which makes Dugald a prime parish vicar or rector candidate) and the daughter of McLaurin of Ardveich, Strathearn, Perthshire the clan chief. There are no contemporaneous records of who Dugald’s maternal family were, the records for Sir John Stewart of Lorn himself are few with no mention of his eldest son’s maternal family. 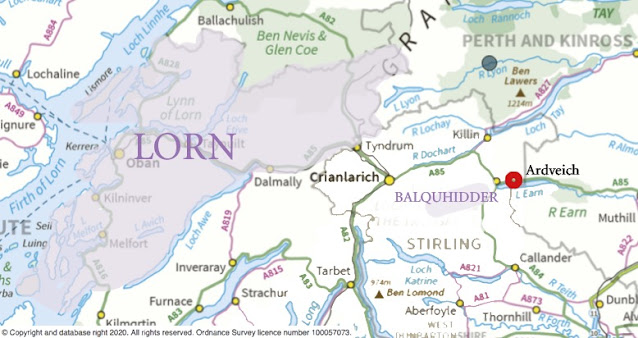 Ardveich, Strathearn, where the fiction from 1880 states Dugald McLaurence, Stewart of Appin I family was from. 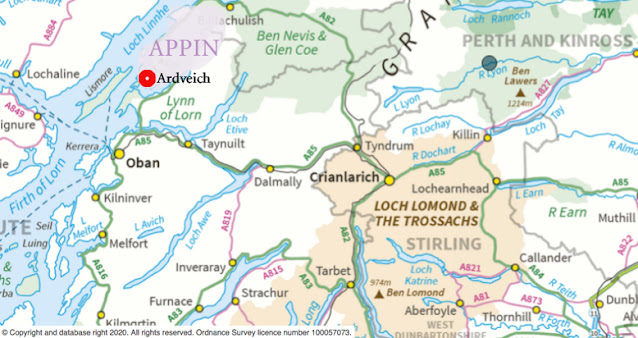 Ardveich, Appin, where Dugald McLaurence, Stewart of Appin I family more likely was from.

“In 1413 , Sir Patrick Graham, Earl of Strathearn was forced by the Murray family to remove Sir John Drummond from office. In the park at Ferntower Sir John killed Earl Patrick and took flight to Ireland and was never heard of again. Malise Graham became Earl [of Strathearn] on the death of his mother 1408. He was delivered as a hostage for the release of James l from England. James coveted the title and claimed that the Graham claim was faulty. He thus annexed it to the Crown and ended the long line of independent Earls of Strathearn .” Caledoncol, Perthshire Crieff Strathearn Local History, 2012

So during the time that Dugald would have been born in the early to mid 1400s, the Earls of Strathearn had just lost the earldom and it was annexed by the Crown.

In a 1587 list of Lairds, Ardveich is the property of Coline Campbell of Ardveich. Around 1600 Ardveich was burned by a band of MacGregors as they raid Campbell property.

We now know from very recent Scottish scholarship that the only two accounts of McLarens in Balquhidder prior to 1512 were not McLarens at all. Abbot Labhran of Achtow (clan MacLaren’s eponymous ancestor according to Margaret MacLaren, pg. 15) found in MS:1467 never existed according to new research done by Ronnie and Mairi Black on MS:1467, turns out he was a west coast of Scotland MacLaverty. Laurin of Ardveich or Loarn of Ardbechey from the Ragman Roll in 1296 was mistaken for Laurence of Abernathy.

The firmly established Stewart of Appin tradition which states that Dugald MacLaurin of Ardveich, Strathearn became Stewart of Appin I, must be addressed, because of its influence on both clans history. The 1880 story also misdirects the actual place of origin of Dougal of the McLaurence Kindred.

Beginning with the analysis of the death of Sir John Stewart of Lorn the ‘Leper Lord’, not a handsome heroic figure. The only contemporaneous records concerning Sir John are his obituary and a reference to Alane M'Coule assassinating Sir John. Neither records contain anything about his son Dugald. We don't learn Dugald's first name until after his death, found in the following record. We do not know when, where or how Dugald Stewart I of Appin died.

Here are the only two accounts of Sir John Stewarts murder, from them come the legend of Sir John falling in love with an Ardveich, MacLaurin while traveling through Strathearn. The “Wedding Party” poem of Dugald and his Ardveich McLaurins with pipes playing marching to Dunstaffnage castle, and all the rest.

and “It is stated that there is preserved in the Cambridge University Library the original of an Act of the Scots Parliament, dated 1460, recommending the King to besiege Dunstaffnage Castle, for the purpose of punishing Alan M'Coule, who had slain the king's kinsman, John Lord of Lorn.” (Origines Parochiales Scotiae)

In the 1464 Scots Acts of Parliament we find this record concerning Sir Johns assassination.

“Sir John Stewart himself seems to have foreseen their antagonism to his youthful son by his appointment of John McCowle [McDougall clan chief] as his guardian.” pg. 82, Stewarts of Appin, 1880.

In "The Tale of Leper John and the Campbell Acquisition of Lorn" by Steve Boardman, he describes a manuscript that originated with highland seanachies that describes Dugald as the Leper Lords eldest son Dugald. The first names of Dugald's younger brothers are not given in this manuscript from 1634.

The manuscript certainly raises the consideration that Dugald was the legitimate son of Sir John Stewart all along, since Dugald apparently had younger brothers. Boardman also wrote that the 1880 "The Stewarts of Appin" account is the same as the 1885 Campbell version. Boardman was mistaken, there is no mention of Mclarens in the 1885 Campbell account. Below are Boardman’s comments and the 1756 transcript.

"manuscript, which, based upon internal references, was apparently written in 1634, based upon the writings of highland seanachies’ sometimes to be keeped in Abbeys." The manuscript was copied in 1756 and kept in the British Museum. The manuscript was printed in 1885 as a part of "Records of Argyll: Legends, Traditions, and Recollections of Argyllshire Highlanders" by Lord Archibald Campbell. This is the same manuscript that is quoted in "The Stewarts of Appin" by J. and D. Stewart, published in 1880" Steve Boardman

"Here may be opened to your Lop’ [magnifying glass] an ocean of discourse, in case your Lop’ [examination] would be pleased to take the pains to write Highland affairs, as the decay of great sorte his house changed for his eldest son, Dugald, by the Stewarts of Innermeath to the Campbells, who keep it this day; and how the M'Dougalls did keep it ten successions, nine lawful and one bastard; and how this Lipper Lord [Sir John Stewart] was slain  by the Bastard M'Dougal,  and how the Stewarts [Appin] did kill the M'Dougal again [Alan of the Wood, Battle of Leachada]; and in end, with how many varieties  and troubles it came to this Earl [Campbell] who  was in and compelled to give the Stewarts satisfaction, as the indenture betwixt this Earl and Walter [Stewart],  Lord Innermeath, doth bear, dated  August 1469, " Records of Argyll: Legends, Traditions, and Recollections of Argyllshire Highlanders by Lord Archibald Campbell, 1885

There is an 1824 article titled “The Rock of the Wicked Resolution” found in the "Literary Gazette and Journal", Traditions of The Western Highlands No. VIII, 24 April 1824. This article only gives us Dugalds first name with no mention of his place of origin. However, it does tell of Dugald and his family ‘sailing from the East’.

The next reference to Dugald Stewart 1st of Appin’s origin comes from 1837, when the first Scottish historian to identify Dugald with a Maclarine mother was W. F. Skene.

“The Stewarts of Lorn are descended from a natural son of John Stewart, the last lord of Lorn, who, by the assistance of the Maclarins, a family to whom his mother belonged, retained forcible possession of a part of his father's estates; and of this family are the Stewarts of Appin, Invernahyle, Fasnacloich, &c. Besides the descendants of the natural son of the last lord of Lorn, the family of the Stewart of Grandtully in Atholl is also descended from this family, deriving their origin from Alexander Stewart, fourth son of John, lord of Lorn." W.F. Skene, Highlanders of Scotland" Vol. II pg. 309, 1837.

I believe that Skene was referring to lady Maclarin coming from the local Maclarin population in Lorn, not the MacLarens in Strathearn which according to records extant, had yet to arrive in Balquhidder or Strathearn by the mid-1400s, when these events occurred. There is nothing in Skene’s account that mentions Balquhidder, Ardveich or Strathearn. A few years later in 1845, James Logan uses Skene’s Maclarins as Dugald Stewart’s maternal line, but writes that they came from Balquhidder, the home of his client Daniel MacLaurin.

What do we know at this point:

A tradition that is commemorated in a Scottish Country Dance is that after his father’s murder Dugald Stewart 1st of Appin and his supporters, made the exodus to the north into Appin, known as the Imrich Latharna or ‘flitting of Lorn’, a literal house moving from the southern portion of Lorn, to Nether Lorn, or Appin, Dugald consolidating his power base north of Loch Creran. Which supports my theory that the MacLaurin Kindred in Benderloch were Dugald’s supporters, not Balquhidder McLarens which according to records extant had not yet settled in Balquhidder.