The McLaurin Railroad aka 'The Wilmington, Charlotte, and Rutherfordton Railroad Company' of North Carolina 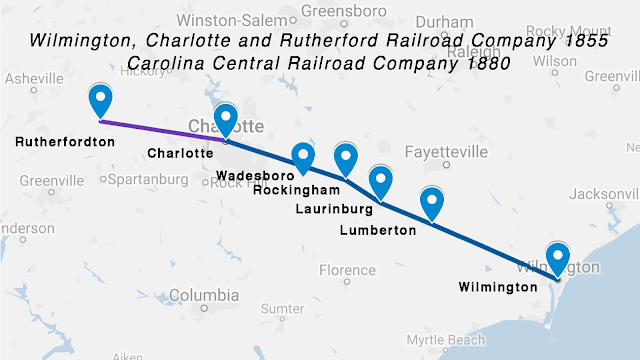 "In 1855 before the counties along the NC/SC State line were successful in getting a charter for an east-west railroad. The Wilmington, Charlotte, and Rutherfordton Railroad would connect Wilmington and Charlotte via Lumberton, Laurinburg, Rockingham, Wadesboro and Monroe. ....The first train left Wilmington on July 5, 1860, and went fifty miles to Bladenboro in Bladen County. Lauchlin A. McLaurin of Scotland County was the first conductor on the eastern end of the road....."  G-cdb -Lauchlin A. McLaurin of Robeson Co., NC was later a captain in the CSA.

Commissioners for creating stock for the railroad company were appointed:
F-ad -Duncan McLaurin - 1787-1869, NC Legislator, Head of the School Board the Laurinburg School District which was named after him.

John Gilchrist, Jr. - I think he later went to Mississippi,

Daniel McKinnon - His father Daniel McKinnon who died in 1825, Donald/Daniel Sr. appears in the 1790 Richmond Co. census with a wife 1 son and 3 daughters. In the census Daniel is just above John McLerran and below F-a -John McLaurence on page 178. He also appears in 1779 and 1792/93 Richmond Co. tax records..

In 1869 following the Civil War a re-organization of the Rail Road Company was necessary, stockholder meetings where held in Charlotte and Wilmington, NC. By this date there were no McLaurin Directors, they were still stockholders though. From the report the Post Office and War Department appear to be significant customers.

NOTES by Rex McLaurin
Dr. Robert Dickson was a son of James Dickson, a native of Ireland and Anna McCall of Scotland. The celebrated Dr. James Dickson of Wilmington was a brother; and Joseph Medill, who founded the Chicago Interocean and became such a power in Republican politics was his first cousin.

Michael Cronly was the only child of James and Sallie Taylor Cronly of New York city. His parents dying, he was brought up by his uncle, Mr. John A. Taylor of Wilmington. The children are Jane Murphy, Sallie, Taylor, Joseph Murphy, William, (the last four now living) Michael, Douglas, Robert, Dickson, Margaret and Mary Dickson.