Dr. Lachlan McLaren in Glenourock, Appin then later in Maryburgh. Lauchlan married Isabella Cameron daughter of Archibald Cameron of Dungallon, son of Sir Ewen Cameron of Lochiel. His first cousin by marriage was Colin Campbell of Glenure, the victim in the celebrated Appin murder, in May 1752. Son Euan went to South Carolina in 1774, where he married, acquired wealth and fought as a Loyalist in the Revolutionary War. Euan later went to Barbados with his sister and died there. Roseberry, Earl of, List of Persons concerned in the Rebellion, Scottish History Society, Edinburg 1890. I have included Dr. McLaurin’s testament in the Appendix. 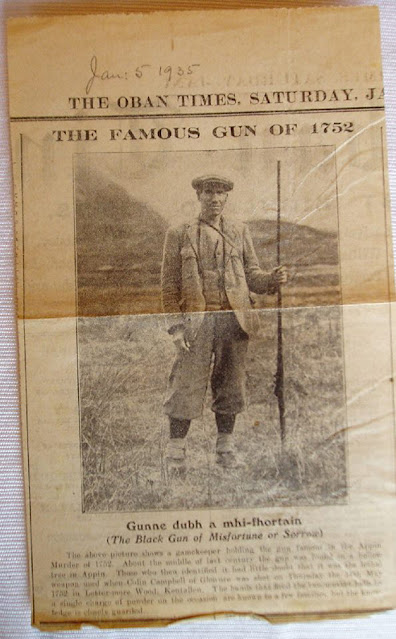 ‘The black gun of misfortune’

James Stewart did not use ‘The black gun of misfortune’ to kill ‘Glenure’, The secret lies in Stewartsville Cemetery, outside Laurinburg, NC.

“On Monday 25 September 1752, Scotland’s High Court returned to Session in Inveraray having just completed a very welcome 24-hour break. Prior to this, the court had sat for 53 hours straight, without formal intermission, hearing the case of James Stewart, who was accused of conspiracy in the murder of Colin Campbell of Glenure, the Red Fox. Although this was the way criminal courts were held in Scotland at this time, a trial of such length was quite exceptional. A guilty verdict had been reached the previous day and James Stewart’s sentence was due to be pronounced.

Campbell was a government employee; the Factor of three West Highland estates that had been placed in government control, as their previous owners had launched an armed insurrection against the British State. The rebels, known as Jacobites, had tried to overthrow the ruling order; from the West Highlands they marched deep into England, their efforts ending in 1746 at the Battle of Culloden, where the Jacobites were broken and dispersed. As a result, the landed properties of some of the Jacobite leadership in the Highlands were confiscated and taken over by the government. One of these estates was the Ardshiel Estate and it was here that, on Thursday 14th May 1752, Colin Campbell received two musket bullets in his back.” The Appin Murder – HC, Professor James Hunter FRSE