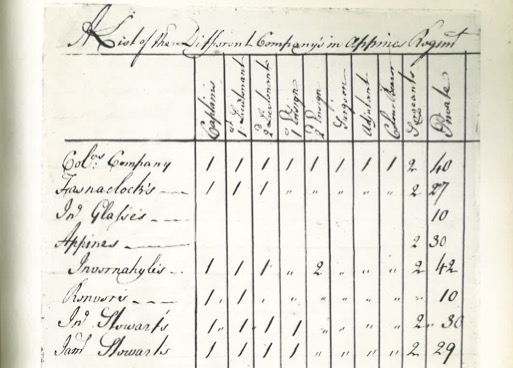 18 Jan. 1746 The Day after the Battle of Falkirk Muir a list of the Company's in the Appin Regiment is entered into the Order Book, shown here. The Appin and Benderloch MacLaurins are distributed among the various Appin companies in family units. There is no discrete Regiment of MacLarens from Balquhidder.

26th August 1745 The Appin Regiment under the command of Charles Stewart of Ardsheal joined the Prince's Army at Invergarry. It fought at Prestonpans, Clifton, Falkirk and Culloden and was employed in the operations against Lord Loudon in Sutherland and Caithness in February and March 1746. Estimates of its strength vary greatly, generally according to the political complexion of the observer. At Invergarry it is said to have numbered between 200 and 260. At Prestonpans, 21 September, almost the same figure is recorded but its strength is said to have risen to 360 by the time of the march into England although one observer then gives its strength at only 200. Stewarts, 1952

Sept. 1745, MacLaurins in Appin muster roll, according to the List of Persons concerned in the Rebellion, Earl of Roseberry, Scottish History Society (Edinburg 1890). It is incomplete, twenty-seven is the count according to records after Culloden thirteen killed, with four of fourteen survivors wounded. One of the wounded is Neil McLaurin who with his family immigrated to the Carolinas in 1790 on the ship Mary Ann, he is not listed in this muster.

“Ardshiel was throughout the 'forty- five' employed in the most confidential transactions, and the MOST PERILOUS ENTERPRISES. He was one of the first who rallied round the 'Tandem triumphans ' standard, and was from the beginning in the council of Charles Edward. He was present at the surprise of Edinburgh, the rush upon the artillery at Preston Pans, and was employed to cover the retreat from Penrith. He joined other leading chieftains in advising the abandonment of the Lowlands, after the Battle of Falkirk ; and even after the disastrous field of Culloden, pledged himself to re-assemble with the remaining Gaelic bands.

Soon after this last declaration, however, he was, like his prince, obliged to screen himself from his pursuers, and remained for some months sequestered among the peasantry of the Appin district, until his escape to France. It is probable, that upon this simple web Sir Walter Scott, as above stated, has so beautifully embroidered the tale of the concealment of Baron Bradwardine. Stewart of Ardshiel, who died at Sens, received for many years a voluntary rent from his former tenants, who could never be reconciled to the compulsory system adopted of farming the revenue of the forfeited estates."

The Celtic Monthly, A magazine for Highlanders edited by John Mackay, Glasgow Number 5 Vol. XIII February, 1905 page 82  * Sketches of the Highlanders of Scotland.

An excellent Biography of Rob Roy is “The Hunt for Rob Roy” by David Stevenson, 2004 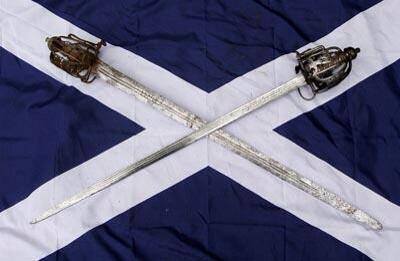