“The cells or priories belonging to Inchaffray Abbey were Strath Fillan, Scarinche and Abernethy.

Strathfillan: situated on the water of Dochart in Braedalbine a sub-division of the shire of Perth was a priory founded by King Robert the Bruce and consecrate to St Fillan in consideration of the assistance he had from that saint at the battle of Bannockburn in the year 1314. At the dissolution of religious houses this priory with all its revenues and superiorities was given by the king to Campbell of Glenorchy ancestor to the Earl of Breadalbane in whose possession it still remains. “

It seems to have been always small and poor.”(Charters of Inchaffray Abbey., S.H.S.., 1910.) Publications of the Scottish History Society, Third Series, Vol. VIII, Calendar of Scottish Supplications to Rome 1423-1428, 1956

“Finally, in the case of the priory of Strath Fillan it was the Campbells of Lawers who benefited, becoming feuars of its kirklands and tacksmen of its fruits after 1560”

“Celestinus was the normal Latin equivalent for Gaelic Gill-easbuig,” Martin Macgregor, Genealogies of the Clans

From 1414 until 1428 Celestine MacLaureus and his followers pillages the priory of Strath Fillan in Breadalbane, Perthshire. “Celestinus was the normal Latin equivalent for Gaelic Gill-easbuig,” Martin Macgregor, Genealogies of the Clans. 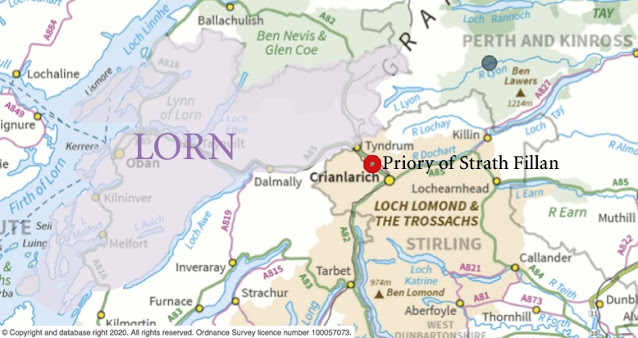 Priory of Strath Fillan, between Tyndrum and Crianlarich

Below is for all practical purposes, Celestine’s wanted poster from the bishop of Dunkeld who oversaw the Strath Fillan Priory. Celestine did not dismantle the priory it by himself, he had followers and his kindred, that profited from along with this outlaw parading as clergy, which appears to be a common occurrence in the parishes. Celestine’s descendants remain in Breadalbane and become tenants in Balquhidder in the early 1500s.

“Although priors and rectors of priories and other regular places are bound according to canonical statutes and by oath to maintain their priories and places laudably in their substance (in suo esse), and to guard and augment rather than to diminish and alienate their movable and immovable goods, yet a certain Celestine Maclaureus, O.S.A., [Order of St Augustine) Dunkeld diocese, on account of his evil rule has permitted the said priory (in which, before he had possession of it, divine worship was daily carried on, well and laudably, according to its primeval foundation) to fall into such great misery and ruin that divine worship is totally abandoned (derelictus), and its structures and buildings, which in old times were extraordinarily notable (notabilia fuere ultra medium), are completely collapsed; and the said Celestine, violating his own conscience and oath, has sold, dissipated and alienated the movable and immovable goods of the priory ; and the fruits, which are most necessary to its reparation, he has unprofitably exposed (inutiliter exponit) and converted to his own uses. On account of these and other crimes, the said Celestine has rendered himself unworthy and merits deprivation from the priory, therefore Robert Beton, canon of Inchaffray, said Order, Dunblane diocese, supplicates that the Pope would give mandate to some good man in those parts, that he inform himself diligently anent all and sundry the foregoing, and if found to be true, should deprive and remove Celestine from the foresaid priory, and collate, assign, and provide Robert to the same, which depends from the abovesaid monastery of Inchaffray and is wont to be governed by monks of the same, with all its rights and pertinents (£30 sterling), whether void by deprivation and removal or in whatsoever way, except by the death of Celestine.” Fiat ut petitur in forma juris. O. Genazzano, Palestrina diocese, 11 Kal. Aug., anno 11. 227, 239 [lipp.] Calendar of Supplicants, 22 Ju1 1428.