McLaurins’ on Jupiter of Larne 1775 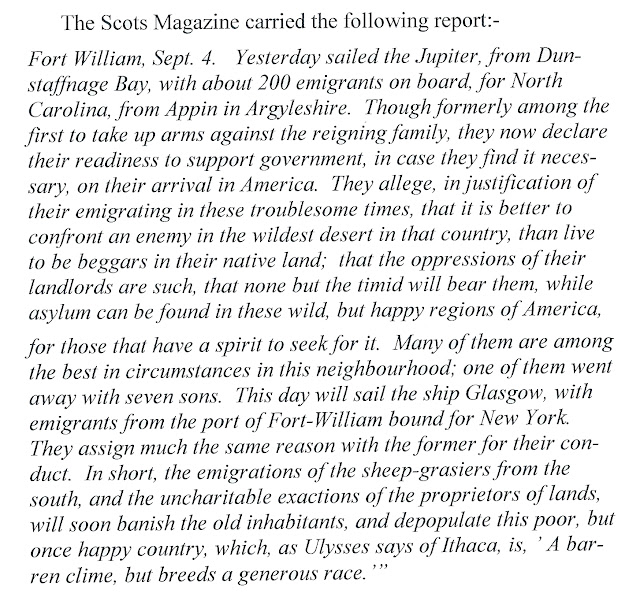 The voyage could be very treacherous with gale force winds sinking ships. 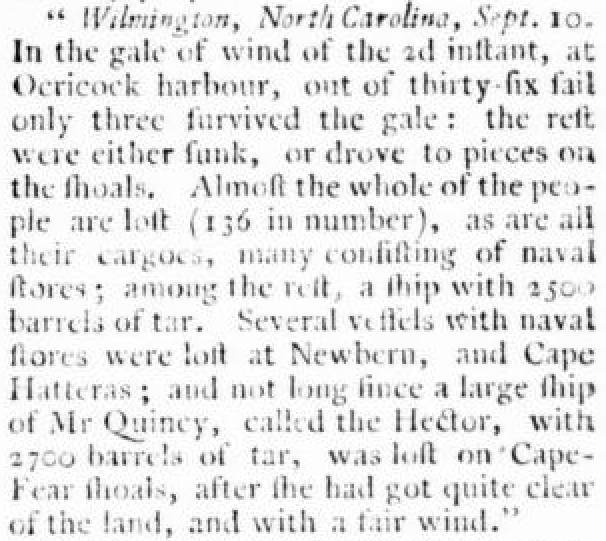 Duncan McLaurin “Duncan McJohn” (D-d), left money with his brother John McLaurin (D-e) in Glendroum to care for a child that Duncan left behind when he emigrated in 1775 on Jupiter of Larne with three of his nephews Donald (D-bb), Lauchlin (D-bd), and Lawrin (D-be). A bill among the Neil McLaurin of Inveresregan Papers (NRS GD170/481) dated September 1779 stated John McLaurininGlendroum had died. CAT pg. 429. 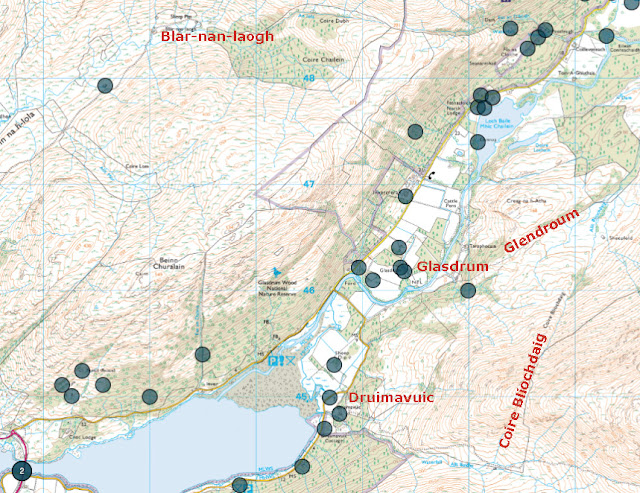 On Goggle maps it appears that you can drive to Druimavuic and perhaps to the southern head of Coire Bliochdaig.

Glendroum in my best guess is the small glen leading northeast from Glasdrum, with long time McColl portioners who also emigrated on the “Jupiter of Larne” in 1775, the John McColl family, who settled in Mountain Creek, North Carolina. By the mid 1770s the McColls had lost their portion altogether. This hints that the four McLaurin men are also from Glasdrum.

Coire Bliochdaig is a long narrow ravine at the north west base of Beinn Squilaird, another McLaurin tack associated with Druimavuic, these two Ardchattan Parish properties are combined on the 1802 tax rolls, with Colin Campbell of Balliveolan the owner. One Campbell or another had owned the two properties in Ardchattan Parish since 1470, when they were among the properties resigned by Walter Stewart of Lorn.

From evidence in the Testament of John McLaurine at Coire Bliochdaig dated 1725, there appears to be a debt due John from a long deceased Sir Robert Campbell of Orchy (1575-1657).  This is a “Wadset”, a loan from one of John’s ancestors to Sir Robert Campbell or one of his ancestors, in exchange for the long term tenancy of  Druimavuic and Coire Bliochdaig, until the loan is repaid sometimes generations later. Perhaps a Campbell repaid the Wadset to the McLaurins, replaced them with sheep then left for America with money in their pocket.

Of interest would be researching the rentals of Druimavuic and Coire Bliochdaig in the Argyll Papers at Inveraray Castle.

#128* Duncan “McJohn” McLaurin (D-d), served as a Richmond Co. North Carolina Tory in the Revolutionary War, just like his cousin Euan McLaurin in Orangeburg Co. South Carolina. He died at the age of 92 in Conecuh Co. Alabama.

#127* Daniel McLaurin (D-bb), later shipped out of Portland, Maine and was drowned at sea.

Druimavuic - ridge of the bucks, pigs

Coire Bliochdaig - A hollow where cows were wont to be milked

A2 Donald/Daniel McLaurin B about 1600

Lauchlan is living at Blar-nan-laogh, Glean na h-lola, owned by Stewart of Appin, in 1715 and 1745/46 where he is an old man. Both his father and grandfather lived at Druimavuic/Coire Bliochdaig.

Da Neil McLaurin b. 1723 Wounded at Culloden (not in STN or SAL)

Lachlain’s 1st cousin is Colin Campbell of Glenure, a younger son of Barcaldine, and of Lucia, daughter of Sir Ewan Cameron of Lochiel,was the victim in the celebrated Appin murder by gunshot in the wood of Lettermore, in May 1752, Physician to Cameron of Erracht and other Camerons.

Fd Allan McLaurin, b about 1710 eldest son and closest next of kin in Lauchlan’s 1759 Testament.

Lorn de Ardebethy also known as Laurin of Ardveich, of the Ragman Rolls 1296

We now know from recent Scottish scholarship, that the two accounts of McLarens in Balquhidder prior to 1512 were not McLarens at all.

Abbot Labhran of Achtow (clan MacLaren’s eponymous ancestor according to Margaret MacLaren, pg. 15 in “The MacLarens”) found in MS:1467 never existed, according to research by Ronnie and Mairi Black on MS:1467, turns out he was a west coast of Scotland MacLaverty. https://www.1467manuscript.co.uk/01b%20introduction.html

Before going further, please keep in mind that Thomson’s “Lorn” (Latharna in Gaidhlig), is a completely different name from “Laurin” (Labhrainn in Gaidhlig). There is no record extant of anyone with the surname McLaurin or McLaren using McLorn. There are many McLaurin and McLaren especially in Argyll whose surname was also spelled McLeran or McLearen, even in 19th century North Carolina, but none using McLorn.

Logan wrote the following, transposing Lorn to Laurin, one of many errors in the McLaren history

“In the Roll of submission to Edward I. of England, which so many of the nobles of Scotland were compelled to sign, 1296, we find Maurice of Tiree, Conan of Balquhidder, and Laurin of Ardveche, in Strathearn, who are presumed by competent authority to have been cadets of the Earl of Strathearn.” James Logan, 1845

After King George IV’s visit to Scotland in 1822, it was very important in the following decades to establish ones noble ancestry. Logan’s presumed competent authority is unknown since he did not share his sources. Logan’s history, is where the Balquhidder McLaren narrative that they are the cadets of the Earl of Strathearn began.

After Logan’s Clan MacLaurin history was published in “McIan’s Costumes of the Clans of Scotland” in 1845, the Laurin of Ardveche narrative was repeated so often by later historians and people in high places that it eventually became a fact:

The following is an excerpt of a “McIan’s Costumes” book review from 1899 describing Logan’s clan histories. It is fascinating to me that the author predicted the future when Donald MacLaren a wealthy industrialist from London, England became chief of Clan MacLaren in Balquhidder and Strathearn.

“Since 1845 very much has been done to render a good deal of the text somewhat antiquated. Many clans are chief-less now, and the wealthy alien often, too often, reigns in their stead.” The Saturday Review of Politics, Literature, Science and Art. London, 21, October 1899 Pg.526

Thankfully Scottish universities have answered the call to correct Logan’s errors, one is in the form of “The sigillography of the Ragman Roll” by Bruce A. McAndrew. [ www.clanstrachan.org/history/Ragman_SEALS.pdf ]

ABSTRACT
The seals, originally attached to the deeds recording the fealties of the Scottish nobility to Edward I of England in1296, and described in Volume II, Appendix III of Bain's Calendar of Documents relating to Scotland, have been analysed using computer database techniques, and correlated with their owners on the notarially attested enrolments of the original deeds. The number identified has been more than doubled to approximately 600. The pattern of seal appendage closely follows the 'homage groups' of the enrolments: seals associated with some groups are almost entirely present, while those associated with others are completely lost, especially in the latter sections of the enrolment. Heraldic seals have been correlated with coats of arms found in early rolls of arms wherever possible.

“For a very long time, U and V were allographs. What’s an allograph? An allograph is a variation of a letter in another context. Uppercase and lowercase letters are allographs. Before the use of the letter U, the shape V stood for both the vowel U and the consonant V.” dictionary.com

When I asked Ronnie Black his opinion on whether McAndrew’s interpretation had merit he wrote the following which describes the huge differences between Abernethy and Ardveich.
“Abernethy was certainly a significant power centre in the middle ages, in a way that neither of the Ardveichs was. I’m afraid that between this and the 1467 MS, the MacLarens have been victims of more than one doubtful reading.” Ronnie Black 26/3/2016

“Abernethy is an extremely potent name in Scottish history. In ancient times it was the religious centre for the Southern Picts and later their political capital and home of their king.” Destinations UK

Abernethy is the location of several important historical locations including Abernethy Tower, Scone Palace, The Royal Palace of Falkland and Huntington Castle. As opposed to Ardveich, a small farm on the northern shore of Loch Earn of no political importance.

Dr. D.C. McWhannell kindly weighs in on the subject, removing without doubt that Maurice of Tiree was in Perthshire, not the Isle of Tiree, Argyll.

“Three names identified as belonging to the Clan MacLaren are found in the Ragman Rolls of 1296, giving allegiance to Edward I of England. These are Maurice of Tiree, Conan of Balquhidder and Laurin of Ardveche. Perhaps this is all fiction.

For Instance ref. Tiry, Morice de (del counte de Perth)
Tyree of Drumkilbo, Perthshire
The present house incorporates the remains of a fortified tower dating from the 13th century. Indeed, the first recorded owner of Drumkilbo was King Robert the Bruce, who gave it to Morice de Tiry in about 1300. The Tyrees were the first confirmed inhabitants of Drumkilbo. On an old tombstone in Kirkinch (Nevay) Churchyard. they are described as ' 'honest men and brave fellows '. The chief of the clan joined Robert the Bruce in the Wars of Independence.

The Tyrees lived at Drumkilbo for 300 years. Sir Thomas Tyree was fond of horse racing. His horse, Kildaro, won the first silver cup raced for at Perth on Palm Sunday 1631. King Charles 1 wrote to him asking for a ' loan ' of his grey gelding. This was probably the famous Kildaro, and one wonders whether the horse was ever returned to Drumkilbo.

Sir Thomas sold the estate to the Nairne family in 1650. They were descended from Michel de Narai, an Italian from Narni who came to Scotland as Italian ambassador during the reign of King Robert III.

Alexander Nairne enlarged the House in 1811, but his descendant, David Nairne, who died in 1854, was the last of the Nairnes of Drumkilbo. The property was sold to Lord Wharncliffe in about 1851.

In 1900, Drumkilbo was sold to Edward Cox of Cardean for his younger son, John Arthur Cox. The Cox family were the leading proprietors of the jute industry in Dundee. The property was then let for a time to Lord Glamis, the heir to the Earldom of Strathmore and Kinghorne, whose seat is nearby Glamis Castle.

Bithweder, Conan de (del counte de Perth) Conan and the 13th. Century landowners in the area of Balquhidder , Gaelic Both Chuidir, were; Conan, Gilchrist and Henry (Eanruig) of Balquhidder mentioned in time of Robert I (see Barrow, “The Bruce”).

Ardebechey, Lorn de (del counte de Perth) As you have pointed out Lorn, Loarn or Latharn is not Labhrann or Labhruinn and who were the 13th. Century landowners in the area of Glen Beich ?”

Ard-Bheathaich or “height of the birch woods ”.

Dal-Bheathaich- “The field of the birch woods ” the lands of this part of Glen Beich were occupied by the Stewarts from about the middle of the 17th century on leasehold tenure ( wadset ) . These Stewarts were a branch of the well known Stewarts of Ardvorlich on the south side of the Loch. The old parish records show countless generations of Stewarts lived in the area but by the mid 19th century all was to change. The Perthshire clearances began both here and in Glen Quaich near Amulree . The people moved away having been thrown off their lands and the roofs of their cottages stripped and burned.

“there is no way of knowing who Lorn of Ardebethey's (Loarn of Ardbheathaich) father was. He was probably not a MacLaurin.” “MacLaren and the Ragman Rolls” review of the facts by Dr. D.C. McWhannell 8/1/2018, Copyright