McLerrans, are they the same as McLarens and McLaurins? The surnames were used interchangeable historically in Scotland and America, as shown below.

“The word learan is not in any dictionary. What could it mean? The answer is pretty simple: ‘shipwrecked mariner’, ‘human flotsam’. Lear is a common poetic word for the sea. Shakespeare picked it up as ‘King
Lear’, the sea-god Manannan being Manannan mac Lir ‘Manannan son of Lear’, that is, ‘the son of the Sea’.“

“The evidence from the north points to an eponymous Leadharan or Leadhran who may or may not have been a saint. Given Moss’s information, a derivation from some word or name connected with ‘leather, hide’ would be highly appealing. Gaelic leathar would not supply it, but its Welsh/?Pictish and Norse cognates lledr and leðr would.10 Moss said that MacLerans had migrated from an original homeland in upper Glengarry to Rannoch, the Aird (of Lovat) and Lewis; Matheson found them in Lewis, Glengarry, Tiree, Knapdale and Kintyre, and was able to establish a connection between those of Lewis and Glengarry. It seems likely, then, that those of Tiree, Knapdale and Kintyre were MacLerans of a different kind from those of the north. “
Ronnie Black, “The MacLerans”, published in the West Highland Notes & Queries, Series 3, Number 18, Jan 2012 pages 3–17.

John MacLaurin Lord Dreghorn’s 1781 Matriculation of chiefly arms, gives his kindreds origin as Tiree, where in 1541 we find McCleruns living at Cornekmoir/Cornaigmore below. Notice the index has them as M’Laren in this 1878 publication of “Rotuli scaccarii regum Scotorum“, The Exchequer Rolls of Scotland, Vol. 17.

In 1509 this area of Tiree was part of the parish of Kirkapool, which was owned by Lauchlani McGillane by Hereditory Rights as chief of clan Maclean, with the blessings of the Crown, which granted these lands to Duncan Stewart of Appin II, after McGillane raided Appin and Duror in 1503.

“The 1509 and 1541 rentals indicate the concentration of settlement in this northwest area and suggest that it was high quality land. The landholdings of Kenovay, Kilmoluaig, Cornaigmore, Cornaigbeg, Balevullin, and Beist had a combined value of 31 marks in 1541, whereas the other landholdings in the parish which were spread out over a great area were only worth a total of 34 marks (ER xviii:614–615). We might therefore conclude, based on these relatively high land values, that there was a greater concentration of settlement in the vicinity.” Sarah Thomas: Beyond the Parish Church: A Study of Chapels in the Parishes of Kirkapoll on Tiree and Snizort on Skye, 2010 Hebridean Archaeology Forum Journal of the North Atlantic, volume 9:67-82, 2015 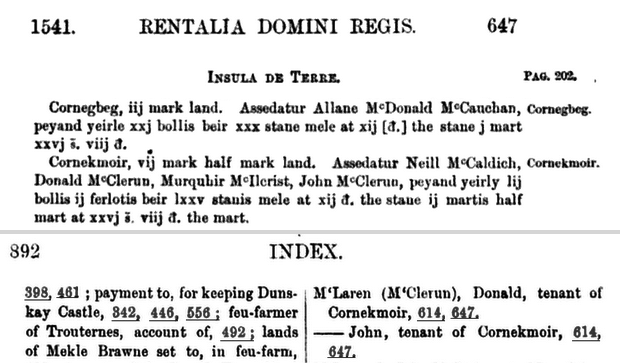 I have not found a better description of the McLerrans/McLaurins or McLarens than the following by Rev. William Matheson in 1986..

“In N&Q ser. 1, no. 28, March 1986, 15–16, Alastair Campbell of Airds told a story about how some MacLeans at Southend in Kintyre added an ‘r’ to their name to conceal their identity. This produced a magisterial response on the MacLerans by the late Rev. William Matheson (ser. 1, no. 29, August 1986, 21–26). Mr Matheson modestly omitted reference to one his own books, in which he had spoken of Fionnlagh Mac Gille Eadharain, ‘chieftain of the clan of that name’, in North Galson, Ness, Lewis, c. 1600.1 In his article he judiciously turned his words ‘chieftain of the clan of that name’ into ‘the head of the tribe’ and ‘tacksman of Galson’, and went out of his way to portray the MacLerans as belonging to a large sub-aristocratic social class which does not figure on clan maps and which is ‘dispersed all over the land from north to south and east to west, bearing their own ancient surnames’. “ Ronnie Black, “The MacLerans”, published in the West Highland Notes & Queries, Series 3, Number 18, Jan 2012 pages 3–17.

In this passage we find McLerans in Cameron country. We know from marriages and the Testament of Dr. Lauchlin McLaurin that McLaurins, Locheil, Auchnaba and Fassfern Camerons were closely tied. Loch Arkaig is about 40 miles due north of Duror and Appin where many McLearens/McLaurins lived.

(“Our usual pronunciation in Inverness-shire, that of natives speaking naturally, was ‘MacLèran’, that is, ‘MacLeran’ with long ‘e’ . . . It may be . . . that it reflected the name Mac Leadhrain . . . Clann Leadhair
(Leadhra, Leadhrain) were scattered around the remote little glens between Loch Arkaig and the western end of Glen Garry [In the map below the small purple area to the north of the origin region]. The worst cattle thieves in Scotland; quite a reputation, given the presence of MacMillans and MacPhees. They were a sept with no land of their own. Living as they did in the disputed frontier lands between Lochiel’s and Glengarry’s, they claimed to be Camerons when Glengarry’s ground officer reached them in pursuit of the tribute due to a landlord, but to be MacDonalds when Lochiel’s ground-officer arrived. ‘MacDonald’ was the name used by all of them who drifted off to other districts – Rannoch, the braes of the Aird, Lewis, etc.”)” Ronnie Black, “The MacLerans”, published in the West Highland Notes & Queries, Series 3, Number 18, Jan 2012 pages 3–17.

Ewan MacDougall relates below the MacDougall tradition that McLerrans in Lorn, like on the Isle of Tiree were known as McLeans

‘The MacNaLearans, improperly calling themselves M’Leans, dependents of the MacDougall Lords of Lorn.” pg. 343 The Perth Incident of 1396, from a folk-lore point of view, Robert Craig MacLagan, M.D., 1905

Interestingly to me the name Laurence appears in the Clann Mhic Eadhrainn (Clan MacLeran) genealogy of MS:1467. Ronnie and Mairi Black provide the following transcription from the manuscript on their website. I added the far right column with known contemporaneous MacLaurins. 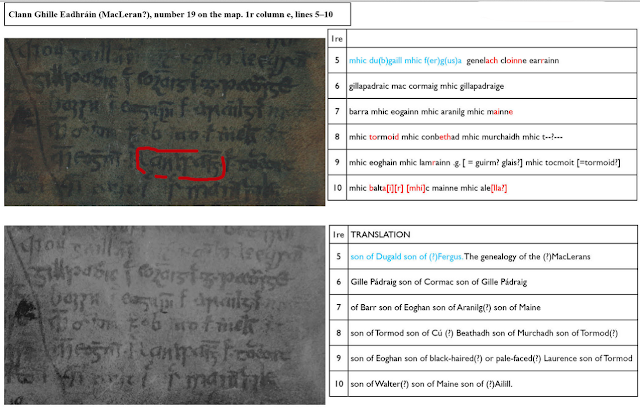 "As you see, this places Laurence of the MacLeran pedigree at c. 1070. He probably knew King Macbeth personally." (Ronald Black, 2016)

There are three possible locations for Barra, the most likely for Mhic gillapadraige circa 1340, is Barrs on the north shore of Loch Etive, two miles north of Cadderlie, where MacLaurins are known to have lived. This was also the home of Dugald Campbell of Bairres, who was Cautioner for John McLaurin in Coire Bliochdaig’s Testament in 1694. There is a Barr, Morvern northwest of Lismore and a Barr, west Kintyre home of the MacAlister Clan, the territory of Lorn lies between the two.

After 40 years of MacLaurin family history research, I can confidentially say that each and every Argyll MacLaren or McLaurin has at one time or another had his or her historical name spelled MacLeran/McLerran or another variant. The reverse is also true, there were McLerrans who changed the spelling to McLaurin in the 1840's Carolinas of the US.

In 1744 Iver McLearan's debt was discharged by Atewart of Appin

Discharge Item"Allowed by the Comptor to Iver M'Learan Tennant in Gylan notwithstanding of his acknowleding to be Debtor for 12p feoh and of the 8th part of the f Town in cregan the other Tennants paid {but the meek}? each for their 8th part - the so Ivar his old age unsigned 2.23..4"

Acharr, Appin McLearins
Abroad John Mclarine and Donald Mclarine. List of Heretors Tennants Servants and Cottars that are at home and of those that are abroad in the Present Rebellion out of the Country of Appine and Glencoe Those at home in the Ten pound land of Airds only excepted. 3 May 1746

In 1755 a Letter of Complaint signed at Duror by Donald McLearin of Acharr a Culloden survivor. Extracts from “Journal of the MacColl Society” or “Cuairtear Chloinn Cholla” July & August 1969 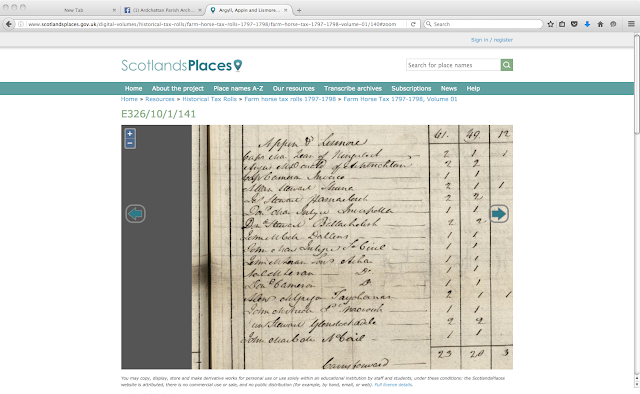 In 1797 Neil McLeran at Acharr, Appin paid a horse tax.

Richmond Co. NC McLearans
1792 - 1793 RICHMOND COUNTY SHERIFF’S TAX BOOK
Hugh McLearan (X-046) is near the other McLearan’s in the 1790 Census. There is another Hugh McLearan (x-047) who I believe is the father of Daniel and Neil McLerran below found in as soldiers in the War of 1812. They lived in Anson Co. NC and are the brothers to John McLerran (L-aac)who went to Mississippi and then his descendant Christopher Columbus McLaurin left there for Jones County, Texas and then to Lynn County, Texas in late 1903.

Breadalbane McLeran
The very rare occurrence of the McLeran surname in Perthshire. In 1703 Duncan Toshach of Monzievaird sends a letter to Breadalbane containing the Glenlednock Bonds and telling the recipient may dismiss Duncan McLeran if he pleases, but they had all better all come down to Taymouth (?).

McLerans/McLerrans that eventually became McLaurin by 1830 In the Carolinas. In Kentucky McClaren is also found.