3 May 1746, List of Heretors Tennants Servants and Cottars in Appin 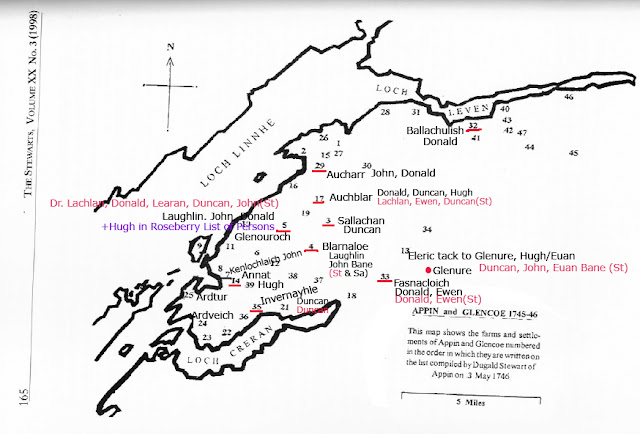 3 May 1746, List of Heretors Tennants Servants and Cottars that are at home and of those that are abroad in the Present Rebellion out of the Country of Appine and Glencoe Those at home in the Ten pound land of Airds only excepted. Compiled three weeks after Culloden, by Dougal Stewart, 10th chief of Appin. A legal document submitted to chief of the Lord Justice-Clerk, Andrew Fletcher, Lord Milton.

“The list has 294 names, 132 at home and 162 abroad (rebels). If the chiefs were tempted to maximize the number of stay-at-homes, he must have been under pressure to give the names of all rebels in the district.” “The beleaguered chief of Appin was undoubtedly trying to give the impression that, on the question of support for the Prince, the clan was almost equally divided. Whether this was in fact correct cannot be stated without knowing the age and fighting quality of the men who stayed at home. The stay-at-homes might have been home guard material. The possibility cannot be excluded that some of them took part in local operations. This would be consistent with observations made at the time by the commander of the Redcoat garrison at Castle Stalker.” The Stewarts, Vol XX #3, 1998

The MacLaurins in Appin’s List are reproduced here with the original spellings. “Abroad” means that they were out fighting with the Regiment. “At Home” means just that they stayed home and were the “Home Guard”

Acharr: Abroad John Mclarine and Donald Mclarine - the next generation immigrated to North Carolina on  “Jupiter of Lorne” with McColls and Stewarts in the 1770’s, arriving in time for the Revolutionary War. Petition signed by Catherine Colquhoun, relict of John McLaren of Acharr a Culloden survivor. In 1755 a Letter of Complaint signed at Duror by Donald McLearin of Acharr a Culloden survivor. Extracts from “Journal of the MacColl Society” or “Cuairtear Chloinn Cholla” July & August 1969

Invernayhle: At home Duncan Mclarine - Probably Ba- Duncan who went to North Carolina in 1790, interred in Stewartsville Cy near Laurinburg.