Lawrence Johnisone is a new find, and has potentially replaced Malcum Maklawryn at Invernenty in 1512 as earliest recorded McLaren in Balquhidder. Lawrence’s children would have the surname ‘MacLaurence’, his grandchildren mhicLawren or V’Lawren. The earliest McLaren in Perthshire at this printing is Cellach McLaures at the Priory of Strath Fillan in Breadalbane c. 1414. Thomas Rogers is also new to me, association with Campbell of Glenurchy or William Stewart is unknown.

Lawrence Johnisone wadset by Thomas Rogers/Rogerson of Drumdewane to Lawrence Johnsione, of lands of Ardquholane (Ardchullie, Strathyre) in earldom of Strathearn, sheriffdom of Perth, for 20lbs. scots, redemption to be made in kirk of Bothquhedder, Witnesses William Scot of Monzie, Duncan McCown, John, son of Dougall, Fergus Murchosoun, Colin Murchosoun and ______ Mc Hawe. 29 Nov. 1464, NRS GD112/1/12 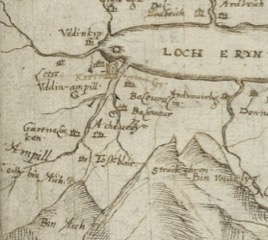 Ardchullarie lies south-southwest of Loch Earn on the North shore of Loch Lubnaig, at the intersect of the Burn of Ample in Strathyre, where several McLarens and Fergusons, lived for many generations. The Thomas Pont 1600 map labels the farm with buildings ‘Achaueoy.’ The modern name for Ardquholane is Ardchullarie, in the past: “Ardquhowloure, Aldchulery c.1750 Roy, E. Ardchullarie 1783 Stobie, .ird Ch.il Odhair ‘promontory of the dun-coloured nook’. Angus Watson (2002, 30) has ‘G .ird ‘point, promontory’ as the first element; the contours form a modest promontory at the site of the present dwelling. “The lands of Ardchullarie were split in two at some point, but this may have been a reflection of the natural situation in any case, for the Ardchullarie Burn runs through the middle of the territory leaving Ardchullarie More on the southern side of the burn Archchullarie Beg was on the northern side. More than that however, Ardchullarie More was in Menteith, while Ardchullarie Beg was in Strathearn because the Ardchullarie Burn was the boundary between CLD and BQR.” Peter Edward (2011) Gaelic place-names and the social history of Gaelic speakers in Medieval Menteith. PhD thesis

“This introductory part of my lecture I will close with some notes on the literary history of the district. It has a life of literary production at this hour. After going West from Callander through the Pass of Leny, and turning northward alongside of gracefully majestic Benledi, you come upon the foot of Loch Lubnaig, deep and calm.

The farm steading of Anie is on your right. The farmer, Robert MacLaren, is a living son of song. He not only sings and beautifully plays on the violin what others have composed, but writes and publishes original verse. His publications are in English.

But a genuine Gaelic poet is found at the furthest extremity of Balquhidder improper, in Glenbeich, on the north side of Lochearn, in the person of another MacLaren farmer. Let me now speak of those who live only in their works. You have perhaps heard the song of "Allandu"; or, "Row weel, my boatie, row weel." It seems to me perfect as a sample of true song—melodious eloquence, "music wedded to immortal verse." Well, in a singularly fresh living book about Perthshire, recently published by Mr Drummond, of Perth city, it is stated that, while the music of "Allandu" is by the famous R. A. Smith, of Kilmarnock (or Paisley?), the words are by one Campbell, of whom it is known that he resided somewhere on the side of Loch Lubnaig.

After passing Anie, on the east side of the loch, you reach about the middle of it, Ardchullery, at an angle (Lubnaig means "Bender"), where the loch bends to the west and north. Opposite Ardchullery Benledi sends out into the west side of the loch the tremendous promontory of Craig-na-Cohilig, whose rugged grandeur impresses the beholder with an awe that represses his natural feeling of delight in the sublime.

Ardchullery was at one time the summer retreat of the famous traveller James Bruce of Kinnaird; and from that he would sometimes cross the loch to Crig-na-cohilig for the purpose of undisturbed prosecution in its wild solitude of studies connected with his world-renowned travels in Egypt and Abyssinia towards the sources of the Nile. But Bruce was an exotic; and Campbell may have been. Let us look for flowers of literature native to the district.” 1876 - The Pamphlet Collection of Sir Robert Stout: Volume 46

L-J-V - Donald McLaren, Perthshire, m. ______MacKinley of Tyness, had a son (there might have been other children) Finlay MacLaren bapt. 12 Feb. 1762 Balquhidder.

V-a - Finlay married Margaret Campbell 4 April 1785 at Callander. They came to the USA about 1793 residing first in New York City then moving to Albany, and finally settling in Onondaga, New York. Finlay died in 1810 from a bear attack. Margaret died 7 April, 1845 at the age of 87 in Caledonia, NY. See quarterly #6, pg 27

Finlay's grandson was brevet V-afc - Brigadier General Robert Neil McLaren b. 9 April, 1828, Caledonia, NY d. 30 July, 1886, St. Paul MN. I ran across Robert while reading about the Sioux Uprising 1863-64, he was Maj. of the 5th Minn. Cavalry. Apparently his papers are in the Minnesota Historical Society Library on microfilm.

"M" saw much action in the Indian Wars he writes "the indians completely surrounded our Command and could be seen in great numbers on every hill top. Their line could not have been less than ten miles long." Leo Gillich

Robert McLaren was a member of the Stank Branch, born April 12, 1773, in Toman, Callander. He is one of nine children born to Robert McLaren and Catherine McBeath. His grandparents were Archibald MacLaren of Stank and Janet Drummond. 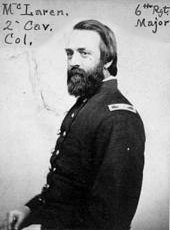 Robert's wife Catherine McKinley was born April 5, 1794 in Ardchullarie, Callander, daughter of John McKinlay and Mary McVean (John McKinlay was the last McKinlay in Annie). Both Robert and Catherine died at Annie.

They had seven children:

John and James went to Ontario and bought a farm from Robert McKinley (Catherine’s brother).

John would go to Michigan a couple of years later; son Duncan went to Michigan and became a partner with John in a foundry business; sons Archibald and Donald emigrated to Ontario and bought farms near James; daughter Mary was a farmer’s wife at Ardchullaire (she married another Robert MacLaren from Archcullarie); Robert and Catherine’s oldest son Robert stayed on at Annie after his parents died. As the oldest male of his branch, he became the head of the Stank Branch. All nine of his children were born at Annie. He died at Annie, December 17, 1900.