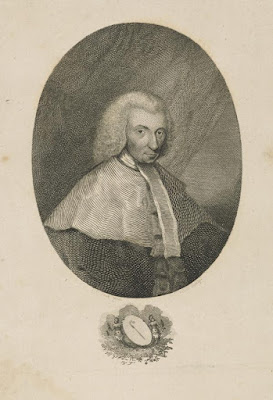 John MacLaurin, Lord Dreghorn, Chief of Clan MacLaurin lived in Edinburgh, his MacArthur and MacLaurin ancestors came from Drumurch on Loch Awe. His MacLaurin ancestors before that the Isle of Tiree and Lorn. St. Moluag’s Crozier in his coat of arms, signifies his ecclesiastic lineage. His father and uncle were both vicars in the Reformed Church. His ancestors were vicars of the Catholic Church in Lorn and Kintyre, dating back to when Laurence de Ergadia lived on Lismore a local cleric who became the bishop of Argyle and worked hand in glove with Robert the Bruce acquiring prebends for Lismore Cathedral and therefore the tithes. It was a family enterprise after everything was said and done.

John’s best known case as an attorney was the Joseph Knight case.

“Perhaps it is improper to consider, as part of the works of Mr Maclaurin, any of his professional papers ; but there are two which deserve to be remembered, the Information he wrote for Mungo Campbell, who was tried before the High Court of Justiciary for the murder of Lord Eglinton ; and an Information for Joseph Knight, a negro, upon the great question, whether a slave unon landing in this conntry, was entitled to his fieedom? The former has been univerfnly read, and contributed not a little to raise the author at the bar: the Inter is upon a subject which all can understand, and as it treats, not merely of the particular case of the negro for whom it was written, but of tho great general question as to the justice of abolishing the Slave Trade, it may therefore be considered as instructive and interesting, at this period, when the fall of negro slavery is fast approaching. It enters very minutely, not only into the argument, but quotes all the noted authors who have written on this truly important subject.

Mr Maclaurin had been employed in a former case, and was retained by the masterr to plead against the slave; but he having died, no decision was given. When the case of Knight occurred, he undertook his cause; [ Knight v Wedderburn ] and having pleaded against the slave as a lawyer, he rejoiced to have an opportunitv of pleading for him as a man. He was assisted in the benevolent undertaking by some other advocates of the first eminence at the bar, [Boswell and Johnson] among whom was Mr Henry Dundas, now one of the Secretaries of State, and another gentleman, since promoted to the Bench.—These gentlemen volunteered in the cause of Freedom, and the negro prevailed, The motto Mr Maclaurin prefixed to his Information was taken from Virgil's second Eclogue: "Quamvis ille niger, quamvis tu candidus esses;" “As black as he is, so should you be white” which was so opposite to the subject, that a gentleman, intending to pay a compliment to the author, asked him if he had made the motto ?” The Scots Magazine, October 1798, Page 656

“After the Restoration of the Monarchy in 1660, Scotland entered a period of religious strife as King Charles II tried to force his Episcopalian Church on a predominantly Presbyterian people. The results of the Conventing Wars, which ensued from this policy, eventually yielded a strong and strict Presbyterian Church, but not until many lives had been lost.

For over twenty years, Covenanters waged war with Royalists until, in 1688, with the ascension to the Scottish Throne of William and Mary (ruling jointly), the Covenanters at last could establish Churches of strict Presbyterian nature while remaining loyal to their Monarch. As speedily as possible, Episcopalian Ministers were removed and frequently had to be forcibly replaced by inexperienced, quickly trained Presbyterians, so it was not until about 1694 that the Church of Scotland was an  established Presbyterian Church.

Two of these newly available incumbencies were filled by the brothers Daniel and John MacLaurin.. In 1698 Daniel was appointed to Kilfinan Parish, Argyll, his brother having already been appointed to Kilmodan Parish in a nearby glen. While at Kilmodan, situated in Glendural, Cowal, John (born in 1658), was blessed with two sons: John, born in 1694 and Colin, whose letters are the subject of this volume, born in 1698. Six weeks after Colin’s birth, the Rev. John MacLaurin died.” The Collected Letters of Colin MacLaurin

John's father was Colin MacLaurin the noted mathematician, his biographical is readily available online. I also had access to ” The Collected Letters of Colin MacLaurin”, Stella Mills, 1982, for a few months, for Colin’s family history information. One of Colin’s letters describes his 1721 visit to Rev. Campbell at Auchnaba, Ardchattan Parish. He lamented that he was unable to visit his cousins living in the area because of the weather. Art that time there were McLaurin families living in Ardchattan Parish at nearby Ferlochan, Inveresragan, Cadderlie and Kiel.

The chiefship was claimed by John Maclaurin, Lord Dreghorn the son of Colin MacLaurin the eminent mathematician and philosopher in a petition to the Court of the Lord Lyon, he proved his descent from a Clan that had long been in possession of the island of Tiree, one of the Argyleshire Hebrides. In the descent submitted to the Lyon court of arms, by Lord Dreghorn, he traces his ancestry to a Donald MacLaurin, Burgess of  Inveraray. It is interesting to note that John MacLaurin’s Chiefly Arms Matriculation is worded very similar to the wording of Murdoch in “An account of Sir Isaac Newton’s philosophical discoveries” in 1750, thirty years earlier.

NOTE: Neither of them say that Donald MacLaurin, Burgess of Inveraray was from Tiree, only that his ancestors came from Tiree. I think this is related to the MacLaurin’s possession of MS:1467, in 1738. Also, the reference to “Monuments in Tyree” is a reference to Records not a cairn, statue, or ruins. An example are the “Breadalbane Muniments” the Papers of the Campbell, Earls of Breadalbane. The Monument in Tyree is likely MS:1467.

“Colin MacLaurin was defcended of an ancient family, which had been long in poffeffion of the ifland of Tirrie, upon the coaft of Argyle-shire,” Murdoch

“John MacLaurin of Dreghorn Esquire Advocater son and heir of Colin MacLaurin Esquire Professor of Mathematicks in the University of Edinburgh by Anne daughter of Walter Stewart of Stewarthall Esquire His Majestys Solliciter general for Scotland and third son of Sir Archibald Stewart of Blackhall Baronet which Colin was son and heir of the reverend Mr John MacLaurin Minister of the Gospell at Glenderule by Mary daughter of John Cameron of Dunlaskine Esquire which last John was son and heir of Donald MacLaurin Esquire by Katherine daughter and heiress of  .   .   .   MacArthur of Drumurk Kepochan and Barinaryne Esquire in Lochaw which Donald was descended from a long line of Ancestors who appear from Monuments in Tyree and tradition there and elsewhere to have been Proprietors of the Island of Tyree in the County of Argyle and Chiefs of the ancient Sir name of MacLaurin BEARS Argent a Sheepherds Crook Sable CREST a Lady from the middle upwards ifouing out of the Wreath in her arms a Child both proper and habited Vert Motto Bi' se mac an t' Slaurie (Be Thou The Son of the Crook) SUPPORTERS two Britons proper

Matriculated 6th of October 1781.” [The ‘pot crook or hook holds the vessel over the fire in the hearth.] 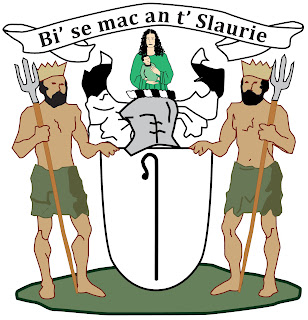 Ronnie Black made the following comments concerning the Motto when queried. The “enslaved race” that Ronnie mentions just might refer to the Joseph Knight case that John MacLaurin worked on.

“Not easy. The only sense I can make of it is Bain-sa a-mach an t-slabhraidh, “Take possession of the chain”, “Take control of the chain”. Fairbairn (Fairbairn's Book of Crests of the Families of Great Britain and Ireland, James Fairbairn) etc. have understood it as the pot chain that hangs over the fire with a hook (“crook”) at the end of it. I would understand it as the chain itself, signifying control, authority. So I would read it as the motto of an enslaved race that wishes to throw off its chains and make a break for freedom. It’s quite deep.” Ronnie,. On Jan 19, 2017, at 1:57 PM

“It looks like Irish when I spell the first word Bain! I should have spelt it Buin, because it’s Scottish Gaelic all right. It was only in the eighteenth century that a distinct Scottish Gaelic spelling was developed, and the process was still going on in 1781. It wasn’t completed until 1801 when the whole Bible appeared in Scottish Gaelic spelling. Buin-sa a-mach is the best I can do with Bi’se mac, which is pretty hard to understand; ant’ Slaurie is the easy bit.” Ronnie, January 20, 2017 10:19:26 AM CST

"In granting him [Major Donald MacLaren] the appropriate arms, with supporters, the Lord Lyon makes a distinction between the MacLarens of Balquhidder and Strathearn, and the MacLarens of Tiree, whose arms and descent are, his Lordship holds, those of a different race" The Scotsman 17 July, 1957.

This ruling is upheld into the 21st Century, by the Court of the Lord Lyon

The article points out the distinction between the Hebridean MacLaurins of Tiree, from whom Lord Dreghorn was descended, and the mainland ones led by Donald Maclaren of Maclaren who is chief of all other Maclarens.

As you descend from the Tiree Maclaurins I can see no reason why you should not use a  crest badge taken from the crest and motto of that Maclaurin recording but, of course, no-one has made up title to these arms last recorded in 1781 and thus this branch has had no recognized chief for nearly 250 years.

Elizabeth Roads, Lyon Clerk and Keeper of the Records, Court of the Lord Lyon, 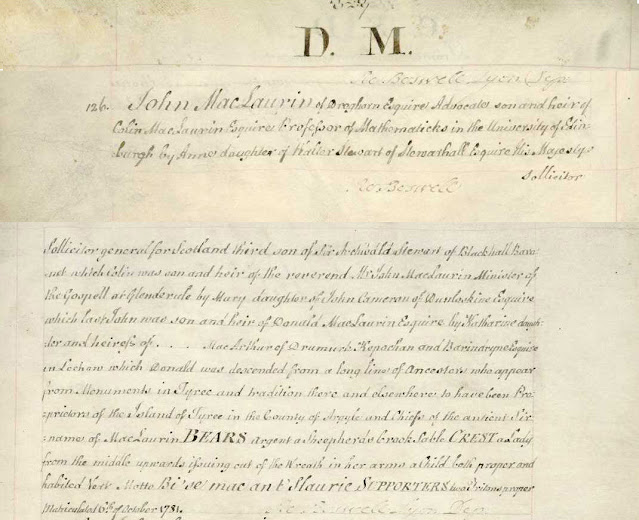 Even Stella Mills, University of Birmingham Editor of “The Collected Letters of Colin MacLaurin” felt it was important to set the record straight in strong language, on the two different McLaurin lines. Stating much the same as Ian Grimble that when the Lord Lyon granted Donald MacLaren “MacLaren of MacLaren” in 1958. Donald’s stance and still is in Donald Jr’s speeches, he is chief of all the McLarens/McLaurins, because Daniel MacLaurin was from Tyrie, Perthshire, not Tiree, Argyll.

“Even so, in the 1950s and 1960s there was much discussion [referring to Donald MacLaren of Auchleskine] about McLaurin’s ancestors being from Tyrie in Perthshire from where the ancestors of the McLaren Clan came. There seems to be no justification whatsoever for assuming any connection between these Perthshire MacLaurins (as the ancestors of the McLaren Clan were called) and Colin MacLaurin’s ancestors - especially as there were many MacLaurins on the Isle of Tiree, Argyll in the seventeenth century. In short, there seems to be no evidence to refute any of the statements made in John MacLaurin’s 1781 Petition to the lord Lyon, and what evidence the records can give us serves only to substantiate the Petition. It is unfortunate that this controversy of Clan history (for John McLaurin’s Petition being granted means his Clan is totally separated from the MacLaurins in Perthshire) is now never to be settled conclusively.” The Collected Letters of Colin MacLaurin, Stella Mills, 1982