Limited Edition MacLaurin of Dreghorn clan badges are now available, made in USA. 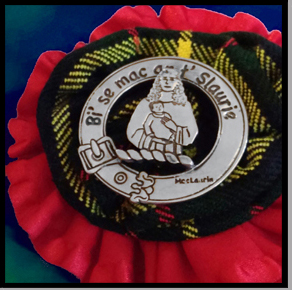 "Bi' se mac an t' Slaurie" pre standardized gaelic meaning “Take control of the chain”, referring to the hearth chain that held the cooking pot. The deeper meaning is open to ones interpretation. Perhaps a quote from Ossian? It is not found in the Bible.

Clan Chief's Crest matriculated by John MacLaurin, Lord Dreghorn in 1781 the son of Colin MacLaurin the noted mathematician, educator and historian who collected the genealogies of Western Argyll found in Manuscript:1467. "Crest a Lady from the middle upwards ifouing out of the Wreath
in her arms a Child both proper and habited Vert" In use long before the modern Clan MacLaren was created in 1958 with it's motto "Creag an Tuirc". 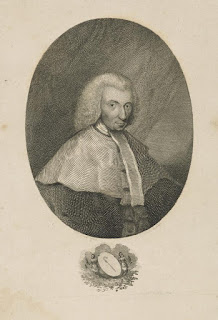 John McLaurin’s "Sheepherds Crook Sable" is a reference St Moluag’s Crozier” on the Isle of Lismore. Heraldsnet.org more accurate description "a bishop's crook in pale sable--M'LAURIN, Dreghorn", eludes to his ancestor Laurence de Ergadia on Lismore circa 1300, as the Keeper of St. Moluag’s Crook.

John MacLaurin was well versed in family history, his father Colin MacLaurin, had hand delivered to the Advocate Library in Edinburgh, what is known today as MS:1467, which he had collected that contained his ancestors genealogy “Clann an Aba Uaine”, ‘the Children of the Green Abbot’.

"Mr. MacLaurin presented to the Society from the Reverend Mr. Malcolme an old Irish Manuscript ", "This is a clear description of the 1467 ms," Ronald Black, 2011

John’s direct lineage contained a long line of Protestant Reverands from the University of Glasgow. My ancestors were the Episcopalian cattle droving Jacobite sympathetic Appin and Ardchattan McLaurin cousins.

Seventeenth century testaments in the National Records of Scotland and other legal documents including John’s matriculation, link these contradictory McLaurin families who fought against each other during the siege of Edinburgh in 1745. Colin MacLaurin a volunteer cannoneer aiming at the invading twenty-seven Appin McLearans in the Stewart of Appin Clan Regiment. 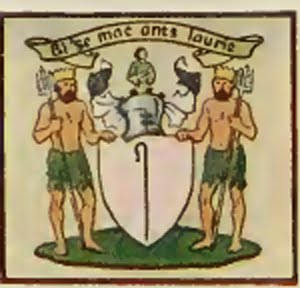 In ancient days on the Isle of Lismore

"When the line of Lord Dreghorn [John MacLaurin] came to an end the clan remained without a chief until, only a few years ago, the representative of the Auchleskine branch was recognized as MacLaren of MacLaren. These circumstances do not inspire confidence that much is known for certain about the identity of the MacLaren chiefs during the period when their office played a meaningful part in Highland life". Ian Grimble Ph.D., F.R. Hist.S. 1973.

Back in the 1970's, Grimble's public comment perked my interest, a respected Scottish scholar whose notoriety far surpassed  other 20th century Clan MacLaren writers. Grimble was questioning a decision by The Court of the Lord Lyon of Scotland, so I set out to find out what he was referring to and also double check the sources cited in "The MacLarens, A History of Clan Labhran" since it is the official Clan MacLaren history. What I found, was a VERY DIFFERENT family history.

My interest began in 1967 with a letter from Banks McLaurin Jr., who along with James Hudson McLaurin formed the Clan MacLaren Society U.S.A. to publish their and other contributors research into a cohesive, readily available to all family history. Over the next decade they published forty-four “Quarterly's", typically of about 30 pages in length. It was not long into the project that they realized that the name “MacLaren” had been a poor choice for the Society as they found that the primarily Virginia and Carolina McLaurins from the west coast of Scotland, had little if anything to do historically with the McLarens in Balquhidder.

"In ancient days the Bishops of Argyle made Lismore their fertile and peaceful abode, and there the forefathers of Duncan McLaren lived for generations." Duncan McLaren, MP, 1800 -1886.

Duncan McLaurin’s clergy ancestors lived at Balimackillichan, just to the northeast of St. Moluag’s Cathedral property on the Isle of Lismore. Laurence the Bishop of Argyle was an abbot from the indigenous tribe of Lismore and the adjoining abbey lands called Appin, this tribe described as the “slaves of Christ”, MacVicars, M’Olchallums, then later also MacLay and McLaurin lives as far as the parishes of Ardchattan Kilmichael and Kilmartin to the north shore of Loch Awe.

This clergy tribe of Loarn, is now thought to be the heirs of Saint Moluag the patron saint of Cenél Loairn. Nearby are the ‘Laity’ readers, known as the Mhic Laeich who descend from ‘Fin’ the ‘lay son of Fearchar’ who probably lived at Bachuil, where Niall Livingstone of Bachuill lives, “Keeper of St. Moluag’s Crozier” and Chief of the McLeas’ and Livingstones’. Niall Livingstone of Bachuill, the only Saint Columba heir, out of thousands from the district of Loairn, to be recognized as a Clan Chief within the Cenél Loairn. Quite an honor.

“Dominican bishops such as ‘Laurentius Dei gratia epifcopus Ergadie’ and Andrew were, like Màrtainn of Argyll, probably local men who were unlikely to have regarded the western seaboard of Scotland as ‘missionary’ territory.” MacDonald, Iain. The Northern World : Clerics and Clansmen : The Diocese of Argyll between the Twelfth and Sixteenth Centuries (1). Leiden, NL: Brill, 2013.