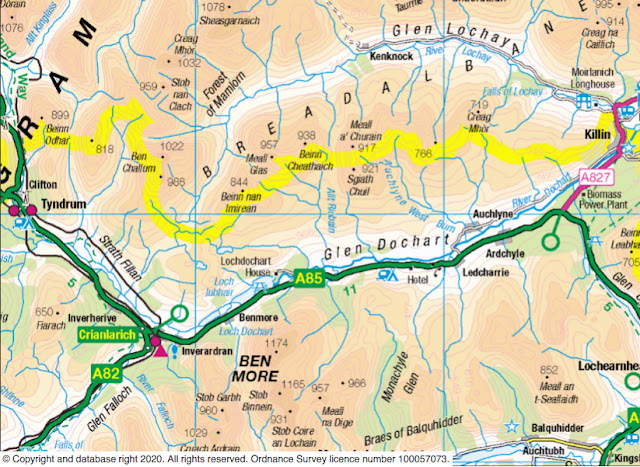 The Donnchadh Ládasach MacGregor kindred lived primarily in the Forest of Mamlorn, Glen Lochay and Corrycharmaig, Glen Dochart. Lying just to the wast of Loch Tay.

Sevin and tuentie we slew into that place

Dr. Martin MacGregor discusses the biographical poem in his Ph.d Thesis, A Political History of the MacGregors before 1571, 1989

“Unfortunately our chief source, a poem in Scots needs to be treated with extreme caution. It was apparently composed for Donnchadh Dubh [Campbell], chief of the Glen Orchy kindred between 1583 and 1631, and thus at least a generation after the events it purports to narrate, and at a time when the relationship between the Campbells of Glen Orchy and the MacGregors had altered irretrievably; while the author's preoccupation with moral and religious themes adds a further distorting element.”

“A poem in Scots titled Duncane Laideus’ Testament is found in the Black Book of Taymouth, apparently composed for Donnchadh Dubh, chief of the Glen Orchy Campbell kindred between 1583 and 1631, and thus at least a generation after the events it purports to narrate. By the time of Donnchadh Dubh, the relationship between the Campbells of Glen Orchy and the MacGregors had altered irretrievably. The author’s preoccupation with moral and religious themes adds a further distorting element."

"According to the poem Donnchadh Làdasach became an enormously influential figure within the clan in the period between the death of James V in 1542 and his own execution in 1552. It was at his instigation that the MacGregor chief or chiefs carried out separate raids against the MacLarens of Balquhidder (27 of whom were killed) and the Robertsons of Struan (whom Donnchadh Làdasach averred to be planning an attack on the MacGregors); and an abortive night-attack upon the Campbells of Glen Orchy themselves, which aimed to pave the way for nothing less than the replacement of the latter by the MacGregors as the dominant kindred within Breadalbane.

In the words the poet gives to Donnchadh Làdasach:

Had we gottin oure will in thir thingis, This cuntray we thocht oure selffis for to gyde."

"The onset upon the MacLarens is placed at Easter, at some point between the death of James V and the attack on the Robertsons. Thus 1543, 1544 or 1545 would all be possibilities. Yet within this period relations between the earl of Argyll - under whose protection the MacLarens were - and Alasdair Ruadh of Glen Strae seem to have been particularly close. Not until 1547, when Alasdair’s successor Eoin Ruadh lost his position as Argyll’s vassal in Glen Ample to the earl’s son Cailean, is there any hint of estrangement between the MacGregor chiefs and the earls of Argyll."

"Also problematic is the onset claimed to have been made upon the Campbells of Glen Orchy. What little evidence we have for relations between the two kindreds in the late 1540s betrays no sign of a major crisis.”  A Political History of the MacGregors before 1571 by Martin D. W. MacGregor Presented for the degree of Ph. D., University of Edinburgh, 1989,

The poem does not mention a location and certainly states ‘ClanLawren’ not ‘V’Laurane’, So to me, that indicates ClanLawren Breadalbane no Balquhidder, based on their Kindred's. name

The second mention of a ClanLawren massacre comes from the trial of Johnne Mécoull Cheire in 1604 who was accused and then acquitted of the crime of murdering eighteen households of Clanlawren, again with no mention of where the massacre occurred. But it certainly looks like ClanLawren Loch Tay. The only "not guilty" verdict in all the MacGregor trials of 1603 and 1604. No one else was charged with this massacre

“The onset upon the MacLarens is placed at Easter, at some point between the death of James V and the attack on the Robertsons. Thus 1543, 1544 or 1545 would all be possibilities. Yet within this period relations between the earl of Argyll - under whose protection the MacLarens were - and Alasdair Ruadh of Glen Strae seem to have been particularly close.

Not until 1547, when Alasdair Ruadh's successor Eoin Ruadh lost his position as Argyll's vassal in Glen Ample to Colin Campbell of Glenurchy, is there any hint of a problem between the MacGregor chiefs and the earls of Argyll. We have already noted that 1542-49 seems to have been a period of general disturbance in Breadalbane, while independent confirmation exists for the attack on Robertson of Struan, which took place on 22 August 1545. On other counts the poem's version of events seems to square less satisfactorily with what other evidence we do possess. [The disturbance is likely the setting of Argyll’s McLaurins from Lorn by Colin Campbell of Glenurchy into Breadalbane, replacing MacGregors.]

In 1604 John McCoul Chere [Mac Dubhgall Ciar, Balquhidder] and other MacGregors were tried (and acquitted) for the 1558 slaughter of ClanLabhran in Balquhidder Lordship lands. His name indicated that he was a member of the lineage already settled in Glen Gyle and upper Balquhidder. In 1559 Malcolm McCoul Chere in Balquhidder appeared as a witness and signed his own bond of manrent with Glenorchy. Notice that the trial was more than fifty years after the supposed massacre took place. ” A Political History of the MacGregors before 1571 by Martin D. W. MacGregor Presented for the degree of Ph. D., University of Edinburgh, 1989,

Peter J. Lawrie the Clan Gregor Historian writes "Apart from Pitcairn, I looked at J H Burton's "Criminal Trials in Scotland" which devoted 72 pages to the sins of Clan Gregor without even mentioning this murder of the MacLarens. It's not mentioned in Alexander MacGregor's "Feuds of the Clans". Admittedly, MacGregor’s work mainly concerned the Northern Highlands, but one might have thought that the author, a MacGregor himself,  would have mentioned such an outrage.

Joseph Anderson, in his 1890 work "The wicked Clan Gregor" mentions the killing of 27 MacLarens in the 1540s by Donnchadh Làdasach and his band, and the events of 1589 in Balquhidder which followed the murder of John Drummond, leading to the entire Clan Gregor being outlawed for a time. However, Anderson does not mention a raid on the MacLarens in 1558. Nor does Donald Gregory refer to this crime in his "The Clan Gregor" of 1830.

Mentioned above by Mr. Lawrie is Donnchadh Ládasach, who is the villain in an earlier supposed ‘Clan MacLaren’ massacre, this time specifying Balquhidder. The only mention anywhere of a Clan Laurent in Balquhidder prior to Jame Logan in McIan’s Costumes, 1845.

Daniel MacLaurin of Auchleskine on the 1558 Massacre

“A claimed atrocity is inscribed on a recumbent memorial stone in Balquhidder kirkyard - paid for by Daniel MacLaurin of St John’s Wood, London, in 1868.

Daniel MacLaurin in his self-published "History in Memoriam of the Clan Laurin" wrote at length on this supposed event. The book was published in 1865, subsequent to the chapter on Clan MacLaren by James Logan in "Costumes of the Clans" of 1845 (MacLaurin contributed to Logan, asserting his clan’s ancient possession of Balquhidder). MacLaurin's book was used as a primary source by Margaret MacLaren in her 1976 book, "The MacLarens".

“IN MEMORIAM of the Clan Laurin anciently the Allodian inhabitants of Balquhidder and Strathearn the Chief of whom in the decrepitude of old age together with his aged and infirm adherents, their wives and children the widows of the departed kindred, all were destroyed in the silent mid-night hour by fire and sword by the hands of a banditti of incendiarists from Glendochart. A.D. 1558”.

MacLaurin, on page 17, located the 1558 attack in Balquhidder and went on:

"The manner in which they were cruelly dispossessed is related in ‘Pitcairn's 'Criminal Trials’,  where it is said they were attacked in the silence of midnight by a band of the MacGregors who set fire to their thatched cottages, and gave no quarter. They took possession of the cattle and farms of their massacred victims."

"... this last catastrophe cost the Clan Laurin the flower of their youth and manhood, and also the able-bodied or fighting men. Bereft of all protection the infirm, the aged, the women and children offered an unresisting prey to their base destroyers”  ….  ‘The Criminal Trials of Scotland’ by Robert Pitcairn, W.S., gives an account of the cruel murder and burning of eighteen householders of the Clan Lauren, their wives and bairns, committed forty-six years since or thereby." …. "And thus miserably perished, at the least, one hundred human beings, without even time to supplicate their creator to receive their souls.” Daniel MacLaurin of Auchleskine